What is a point cloud 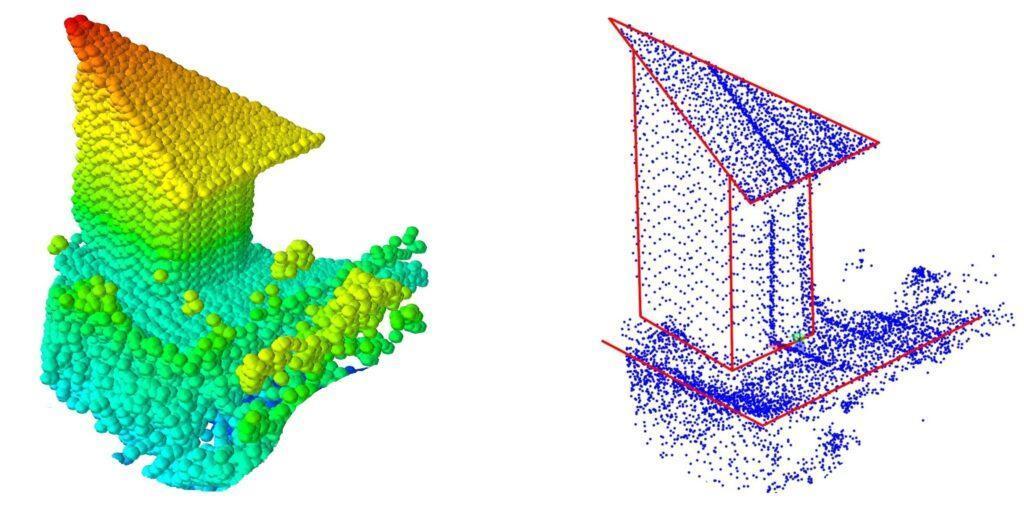 Technically, a point cloud is a set of data containing points located in 3D x, y and z coordinate system. However, from the practical point of view the main importance is that the point cloud is the most precise digital record of an object or space formed as a very large number of points covering the surfaces of the object. The individual points in point clouds are always positioned on the external surfaces of visible objects, as these are the areas where the laser beam from the scanner is reflected from objects. If the size of individual points is large enough, a point cloud can be visually perceived as a continuous surface. However, if the distance between the points is larger, it can be clearly seen that the image is made of separate individual points, but our brain can relatively easily make an object shape from such an image. Please note that a point cloud is a set of separate individual and unrelated points that have a specific position and color. This makes it easy to edit, display and filter point clouds. The point cloud points are also the simplest objects in terms of processing as the computer does not need to calculate the scale, rotation and ratio of points with other objects as the important parameters for calculation are only position and color.

How does a point cloud survey work

The main factor in collecting data for a point cloud is having a good visibility of scanned areas and surfaces. 3D laser scanners works by sweeping the laser beam in all direction usually 360° by 300°. The scanner calculates the distance to an object by calculating the time it takes for the laser beam to hit an object and bounce back to the scanner, therefore it is not possible to obtain points from the surfaces that are not visible to the 3D laser scanner. This means that in most surveys, to cover the entire object of interest, it is necessary to perform scans from several different positions and then combine the scans into one file often know as the point cloud. The term “density” is used to describe the resolution of a point cloud, which is usually referred to the distance between the two points. The less the density of a point cloud, the faster it is to capture the data in terms of on-site 3D laser scanning process. Most point clouds are formed not only with the information about the position of points, but also a description of their visual properties, such as colours and reflectivity. Each of those factors affects the time required for the laser scanning survey as well as the size of the final processed and registered output file, the point cloud.

Point cloud support is implemented in all major CAD and BIM software packages such as Revit and Archicad, so the technology is widely used in various engineering and construction fields. Point clouds can be imported into various CAD softwares and used as background references. As the result, the most detailed and accurate 2D plans and 3D models can be created by tracing over the point cloud data. The coordinate system is the determining value for the location of point clouds. In various CAD design programs like Revit, it is possible to attach point clouds to the same position, which allows to use the project files located in different branches, ensuring comfortable work on the project using one point cloud as a reference.

There are nearly 40 different software from various manufacturers that are designed for processing and viewing laser scanned data and photographs. Every software is different in terms of its pricing, capabilities and limitations. It is important to note that the majority of these software is only available for Windows platform, limiting the Mac OS and Linux users in their choices.

There are a large number of point cloud survey equipment . The most popular:

How much does a point cloud survey cost?

The point cloud survey cost can be between £250 to £1000+. The exact cost is calculated individually for each project. You can send an online quote and we will calculate the cost within 30 minutes.

Some of our works

Look At Our Other Services

This type of measured survey involves the largest work scale, as it involves the survey of the entire building internally and externally, as it typically includes the basement and all of the technical rooms.

We are 3D Visualisation experts providing CGI and Rendering services for Architects, Interior Designers and Developers

Revit families
Questionnaire
Share this with your friends:
Popular posts
RECENT ARTICLES
MENU
We are in social networks
CONTACT
If you have any questions or want to discuss your project please do not hesitate to contact us:
Measured Surveys Measured Surveys 347 Barking Road, London, E13 8EE+44 (0) 203 538 8176+44 (0) 739 901 1771 hello@measuredsurveypro.co.uk